Due to the Covid-19 outbreak we have made the following changes to our hours of operations and services.

NOTICE: ALL VISITORS TO HSSA MAIN CAMPUS, PAWSH STORES, and HSSA THRIFT WILL BE REQUIRED TO WEAR A FACE COVERING AND ADHERE TO SOCIAL DISTANCING GUIDELINES.

We have multiple changes to schedules and protocol due to the Covid-19 pandemic.

The Humane Society of Southern Arizona continues to serve the pets in our care and the people who love them. You can find all of our announcements and information regarding coronavirus Covid-19 by clicking the button below.

Important messages from HSSA regarding Covid-19

Getting the word out

The Humane Society of Southern Arizona continually strives to make our community one where all pets are cared for and loved. We publish a quarterly newsletter and an annual report and we make regular appearances on local media.

Our quarterly newsletter is the best source for news, information, and updates on all of our programs, services, and activities. Back issues of Humanely Speaking are available on Issuu.com.

You can receive new issues of Humanely Speaking in your mailbox! Donate now and be added to our newsletter mailing list.

At the end of each calendar year, HSSA publishes an annual report. Each annual report contains our financial numbers for the previous year, operations statistics including our adoption rates and clinic procedures, as well as a retrospective of our major accomplishments in the last twelve months.

You can read our recent annual reports on Issuu.com. 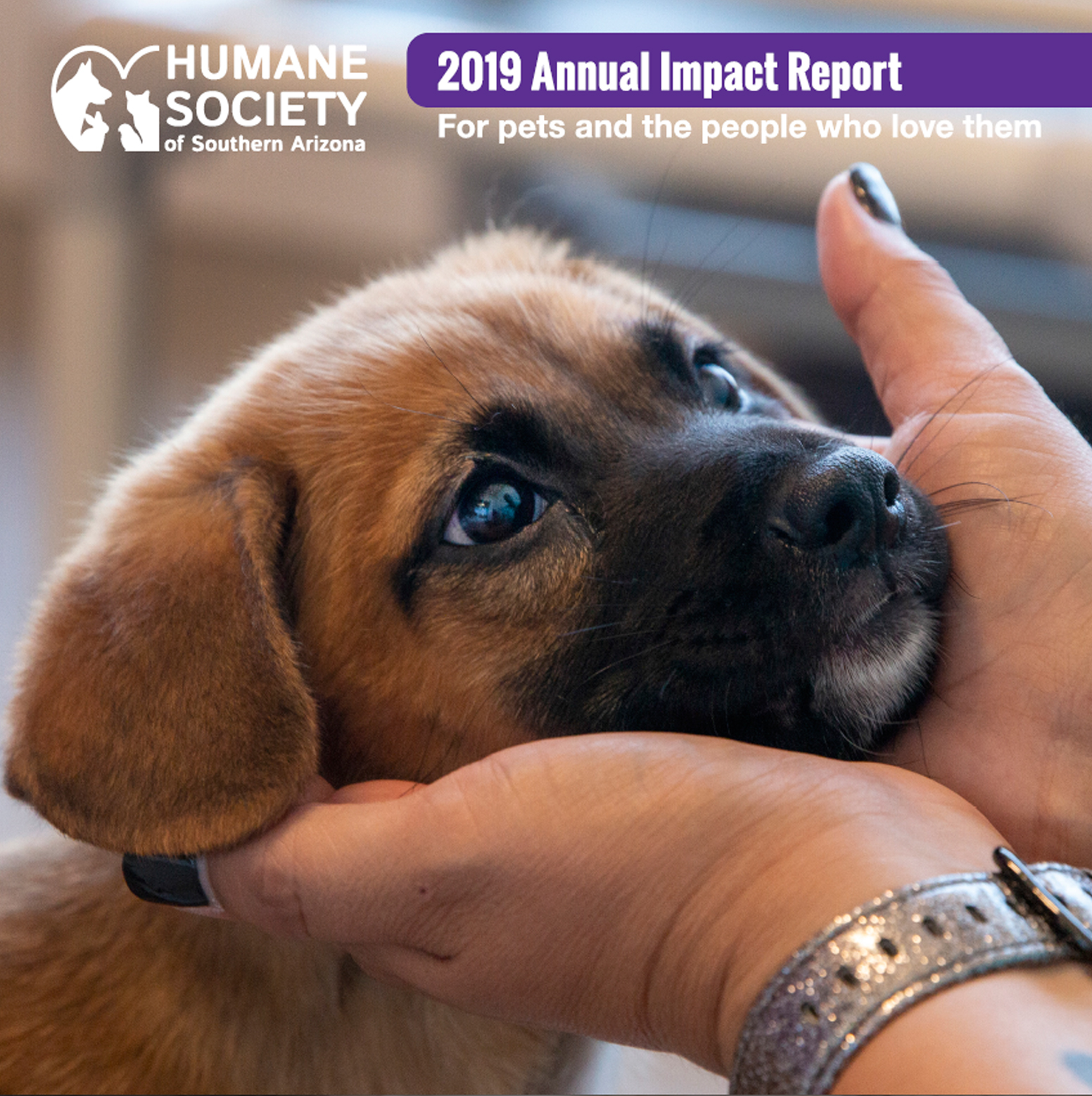 Tucson, AZ (May 30, 2019) — On July 13th, the Humane Society of Southern Arizona (HSSA) will celebrate their 75th Anniversary with a Banquet Dinner at the Hilton El Conquistador that will commemorate three quarters of a century of service and honor those who have worked to maximize the organization’s success in serving more than 1,000,000 pets since it opened in 1944.

One of the HSSA programs that will receive special recognition at the event is their innovative New Beginnings Canine Program. The program pairs dogs that have arrived at the shelter after facing adverse living conditions, neglect, abuse, or other trauma with selected Department of Corrections crew members who work with the dogs through an eight-week course to improve their adoptability and socialization skills. Local singer and songwriter Amber Norgaard will also debut a song at the event that she wrote to celebrate the New Beginnings Canine program.

“We couldn’t be more proud of the fact that we are celebrating 75 years of animal welfare, public education, and advocacy, as well as compassionately connecting Southern Arizonans with animals in need,” stated Diana Cannon, Chief Development Officer for the Humane Society of Southern Arizona.

“From humble beginnings as the Tucson Humane Society on Kelvin Boulevard to our amazing new facility on Roger Road, we’ve led the way in adoptions, low-cost veterinary services, education, microchipping, therapy, and now, with our New Beginnings Canine Program, a wonderful opportunity to help at-risk animals and crew members from the Department of Corrections. We invite the public to join us on this special evening to commemorate 75 years of service and community commitment, and to discover that our impactful work goes beyond the critical service of adoptions,” she concluded.

The 75th Anniversary Banquet gets underway at 5:00 pm on Saturday, July 13, at the Hilton El Conquistador at 10000 N. Oracle Road. For tickets and more information, please visit https://hssaz.org/75

About the Humane Society of Southern Arizona

Since its founding in 1944, the non-profit Humane Society of Southern Arizona has undergone a steady evolution in becoming the full-service animal welfare organization it is today. Acting with compassion and responsible stewardship through innovative programs that serve pets and the people who love them, HSSA is built on three pillars: shelter and placement, prevention, and education and outreach. With a vision that Tucson and Southern Arizona becomes a community in which all pets are cared for and loved, HSSA is proud to be a leader in developing and using best practices that advance the standards of animal welfare in our community and the nation. For more information please visit https://hssaz.org
###

HSSA's Marketing Department visits with several local media outlets each week to spotlight our adoptable pets, discuss upcoming events, and topics related to our organization. HSSA's Public Relations Coordinator, Hannah Carl, features adoptable pets as well as upcoming HSSA initiatives. Check out our schedule of media segments below and be sure to tune in!

Tuesday and Wednesdays between 6am-7pm 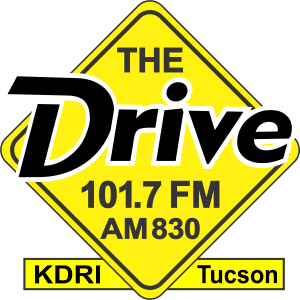 Our media kits feature location-specific photos, text, and logo assets approved for media purposes. We also have high-resolution photos and 4K video we are happy to share with your media outlet. Please send requests for media assets to our Marketing Department at marketing@hssaz.org or 520.321.3704, ext. 146. 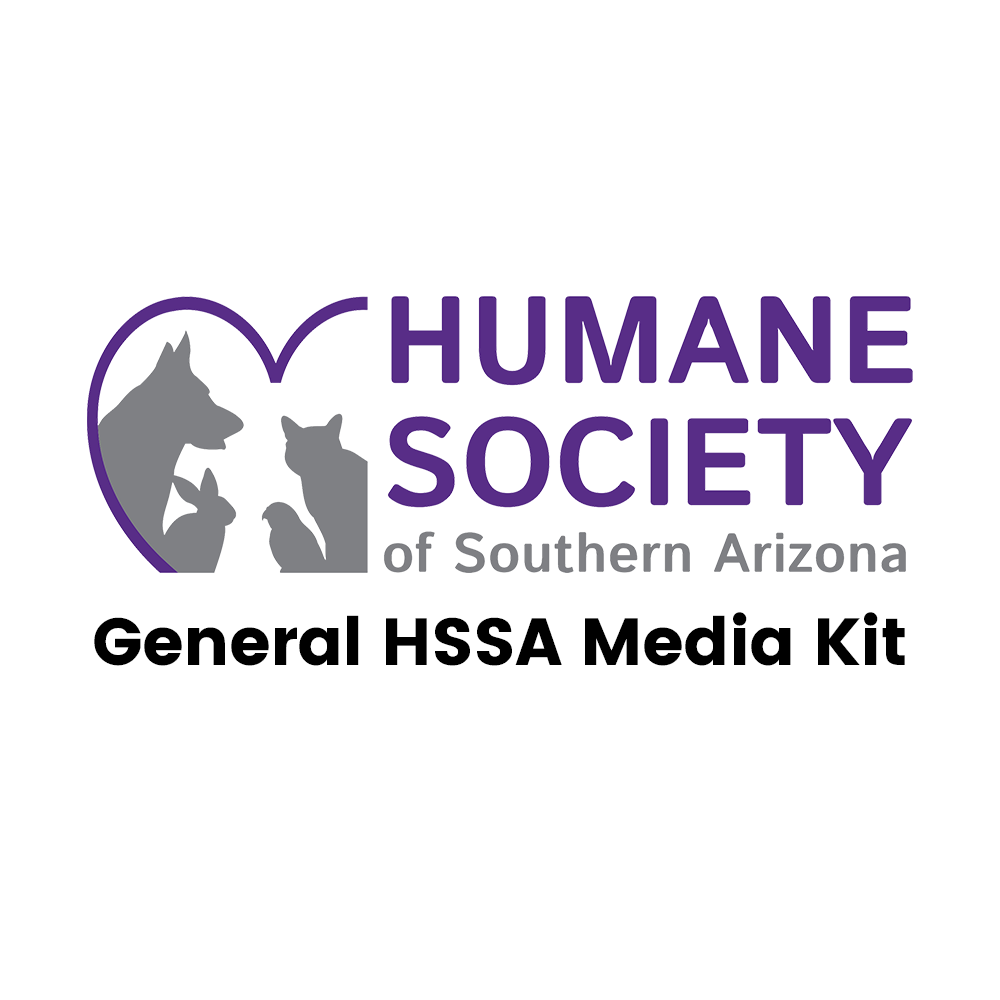 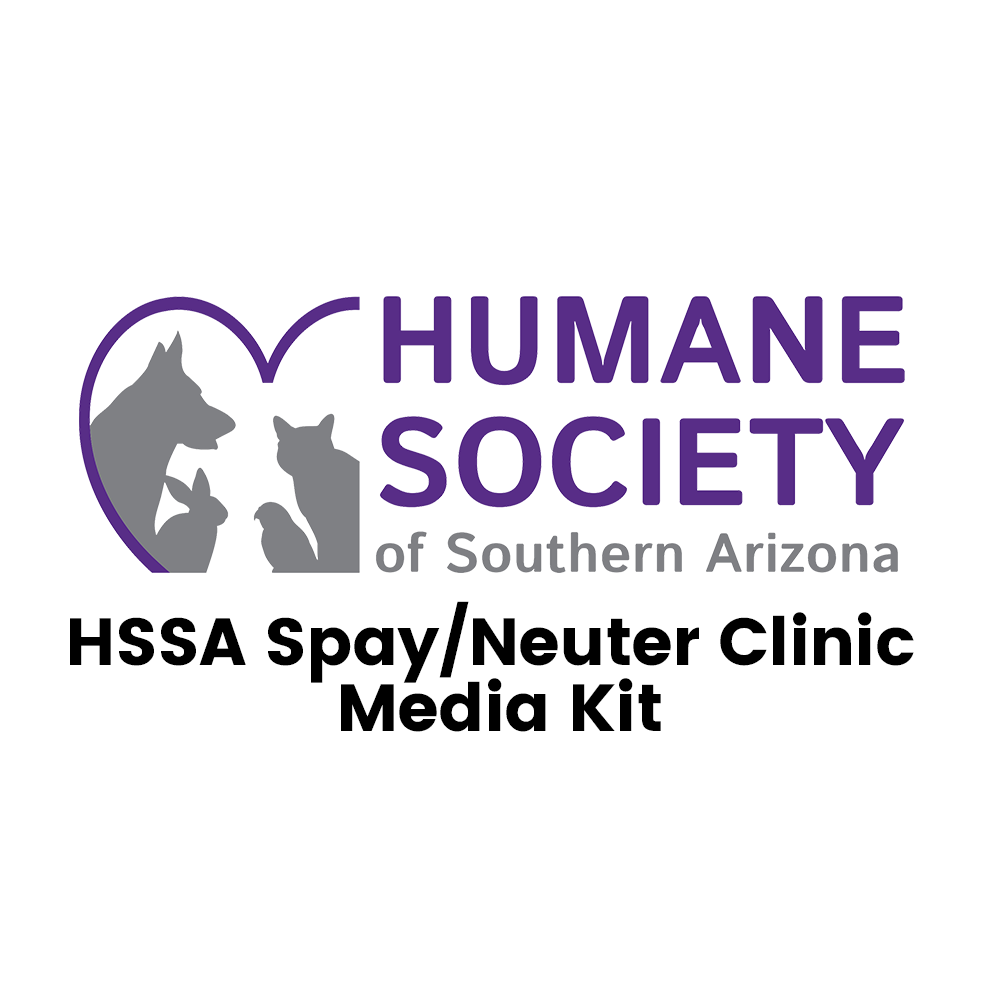 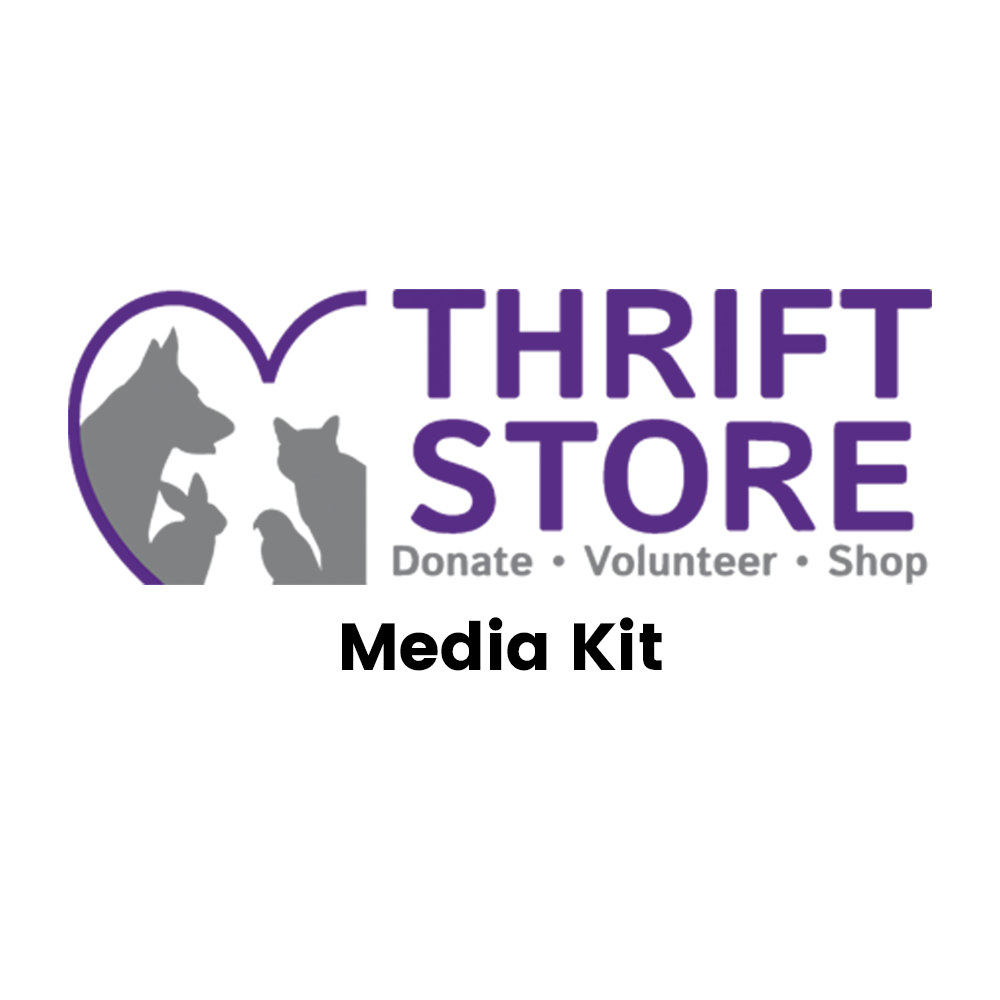 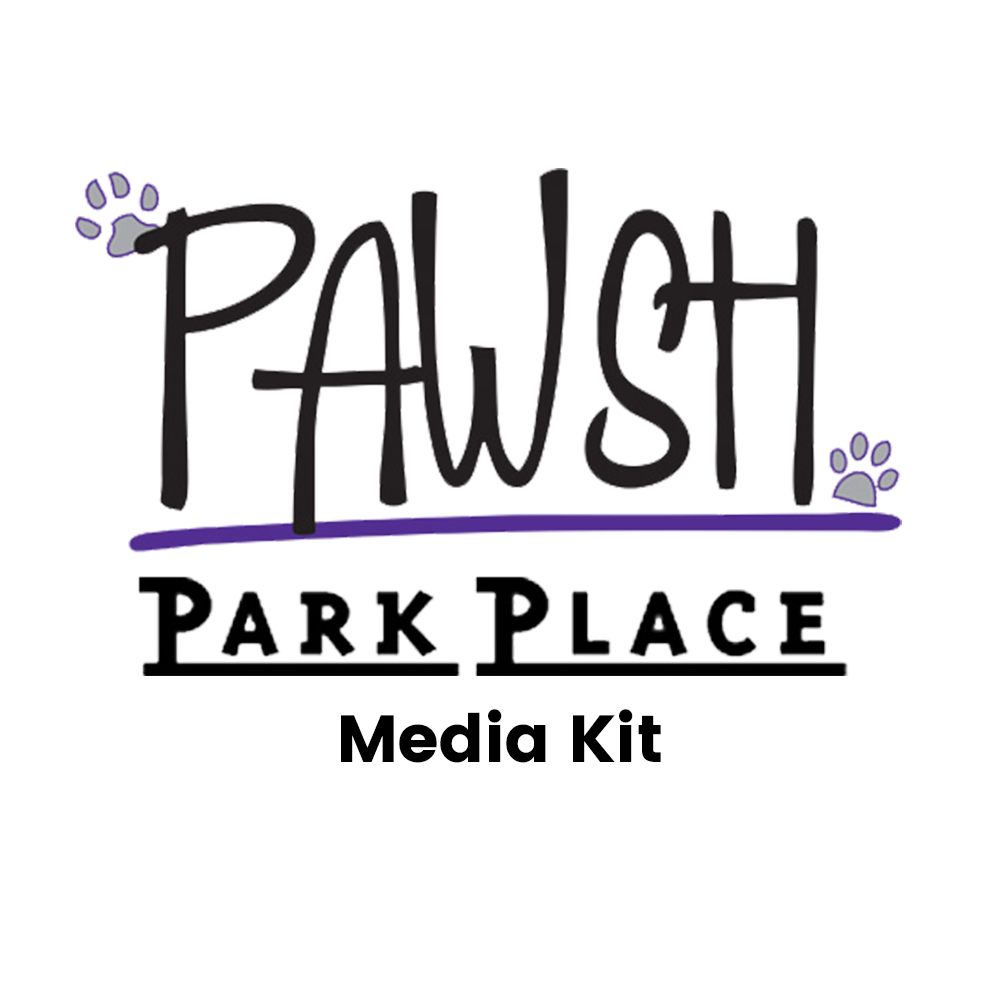 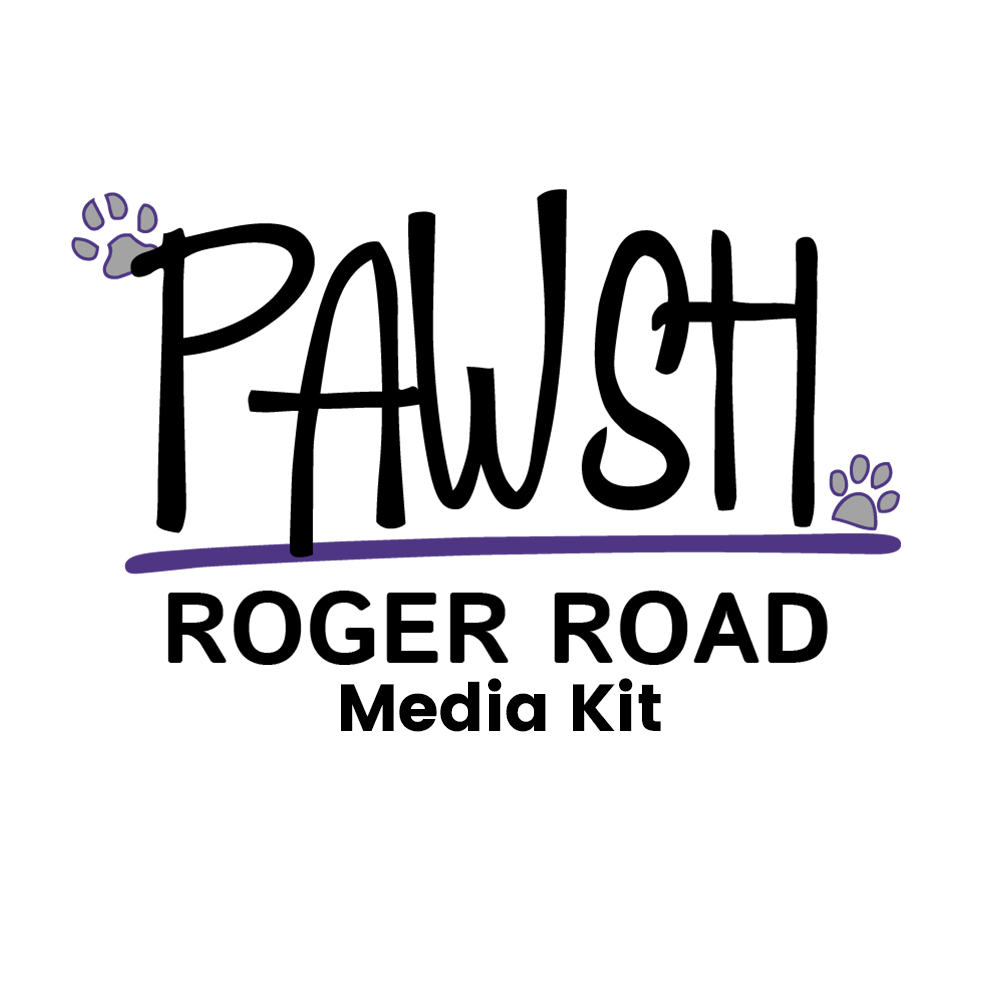 Downloadable Logos for Media Use

Note: Please do not distort, change proportions or aspect ratio, separate any element from, or otherwise compromise our logo design. Thank you!

If you need another file type, please contact our Marketing Department at marketing@hssaz.org.

Get exclusive updates and event invitations